We’re being more mindful of depression in these challenging times. We may watch for common signs of depression in people we know, whether they’re women or men. However, men with depression may think, feel and act differently in ways we need to recognize.

While we must face issues like the coronavirus pandemic, social isolation and racial injustice, it’s also stressful. Chronic stress can take a long-term toll, leading to depression for some.

If we are to help each other and take care of ourselves, minding our mental health is one of the most important things we can do. Depression can interfere with important relationships and self-care. That’s why we want to help people recognize emotional distress and depression, and be able to talk about it.

Depression may look similar in women and men; or it may look different

Both men and women can experience depression as:

However, men and women also differ when it comes to depression. Men may experience certain thoughts, feelings and coping behaviors that don’t look like typical signs of depression.

Men with depression may not know how it can impact their thoughts, moods and actions like this…

Men with depression can be more likely to experience:

Suicide rates: A major sign too many men with depression are struggling alone

Tragically the suicide rate in the US has been growing for a long time. It’s gone up 35% in nine years between 1999 through 2018, reports the CDC.  Men make up the vast majority of deaths:

What stands between men and better emotional health?

It may be simply words.

Talking about difficult feelings – our struggles, fears, doubts, and sadness – can be especially hard for some men.

That’s because cultural norms can make it very difficult for men to open up about feelings.

Culture could be why it seems men struggle with emotions

We sometimes hear questions along these lines: Why don’t guys show emotion?

“We’ve shamed the admittance of pain and idolized toughness in boys. When pain is ignored, there is no language to discuss the experience. Which means we grow up without a language for dealing with pain in a healthy way.”

So writes Carson Sweezy, in His article, “Boys are not tough: Why true toughness is in Accepting Fear.”

Not talking about distress is the model boys see when it comes to dealing with emotions. Sweezy recalls growing up never hearing another man talk about disease, struggle, or emotional pain.

Many cultural messages tell boys and men to endure pain, hardship or even illness without telling anyone it hurts. “No pain, no gain,” is a common theme.

Boys become men who avoid vulnerability or speaking up because they have no words to help each other. “If we can’t talk about pain, we can’t take it seriously. And it will eat us alive,” he explains.

You may have heard of toxic masculinity

Toxic masculinity is unhealthy because it leads boys to believe it is unacceptable to openly express emotions.

In situations especially when there is emotional pain, we may acknowledge it and yet not encourage boys to talk it out.

Boys and men become socialized to “tough it out” instead.

Fortunately, we can learn from men who are learning to speak up.

Admitting a struggle with your mental state is a towering challenge for men. And it shouldn’t be.

Olympic swimmer Michael Phelps agrees. He talks about his own struggle with depression as a case in point.

Even as a gold medal swimmer, Phelps found himself in a downward spiral, dealing with drug abuse, a DUI arrest in 2014, and thoughts of suicide. He spent days locked in his room before he finally admitting he needed help, and sought treatment.

“That’s the reason why suicide rates are going up — people are afraid to talk and open up,” he told SHAPE.com

For Phelps, learning to speak up was key to climbing back from despair. Since the Olympics, talking with young people about mental health and getting the help they need has become part of his mission.

Men like Phelps and Sweezy are showing us the unhealthy impact of some norms on the psychology of men.

We absorb cultural messages and make them part of us. Admitting difficulty in life may feel impossible – not because it is impossible – but because we’re taught to think that way.

Men like Phelps and Sweezy are changing the message.

They want to take the shame out of opening up. Imagine more men helping each other find words for a fuller range of feelings.

What would happen if we could better help each other recognize and process more of the emotions we have?  It sounds like a radical idea. It’s what we mean by radical acceptance.

Another helpful definition of radical acceptance comes from (of all places) eHarmony:

Radical acceptance means loving someone fully for who he or she really is — flaws, short-comings, weaknesses, warts, and all. It signifies loving someone without judgment. It is love filled with empathy and compassion.

Imagine accepting your own feelings like this without judging them.

An open heart and kindness for one’s own feelings can do wonders for mental health too.

Emotional radical acceptance as a path to better mental health

What could a message of radical acceptance do for men?

What could it do for all of us?

Radical acceptance could help us all:

The path to better mental health is something we need to understand if we are going to work together to solve other pressing issues.

And talking more about emotions just might be a lifesaver for men in our culture.

We are here to listen and talk with you, no matter your gender. We offer effective, professional counseling sessions by phone: 703-768-6240

Bring More Balance, Joy and Love Into your Life

Join thousands of readers who come for articles like this each month.

Were Here When You Need Us 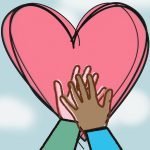 “Why are we unhappy?” Can anything help bring about a warmer, closer relationship? The science of love shows us how to turn withdrawal into deeper connection.

Get 5 Ways to Help Your Relationship Today

Get smart health tips you can use anywhere

We write each month to bring more love, wellness and happiness to your life. Get fresh ideas that help thousands of readers.

Here For You Online

Our therapists are now holding sessions online. We are using doxy.me which is secure, free, and easy to use.

We are accepting new clients.

To talk with a counselor call us —